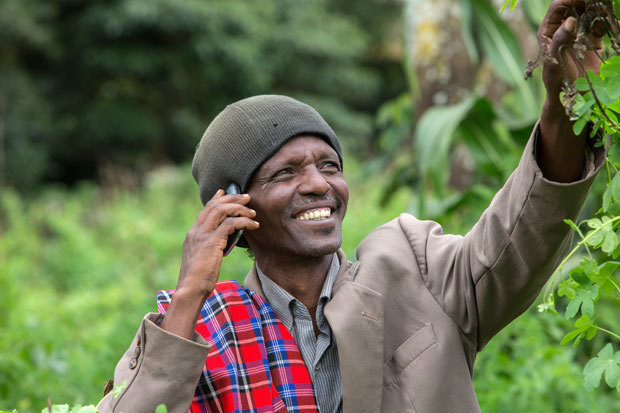 In Kenya and Zambia, researchers are collecting real-time environmental and farming practice data for the purpose of equipping farmers with knowledge they intend to prevent crop failure and increase yearly yields. Farmers in these regions are rain-fed, meaning their yields are solely dependent on precipitation. They are on the threshold of survival.

Prior to the SMS pilot, Indiana University and Princeton University have been partnering to research household-level food security in Zambia focused on rain-fed agriculturalists. In Kenya, they had been conducting water governance and irrigation management research. These projects were the seed for later work seeking to understand the kinds of decisions farmers are making and how their food security changes within a growing season. "It's the farmers on the ground who are the first to know whether their will be a problem with the harvest in a given year,” says Dr. Evans.

The mobile-based pilot in Zambia developed from a desire to improve overall data quality and utility by communicating with farmers on a more frequent, consistent basis. Prior to designing and deploying their TextIt SMS application, the research team had spent previous years interviewing farmers once per year. “When this is the case, you don't have the same capacity to understand how their (farmers’) context changes within a growing season,” says Dr. Evans.

The researchers piloted their TextIt SMS application during the 2013-2014 growing season with a set of 60 farmers.  The pilot allowed them to understand the capabilities of each farmer, asking questions about the farmers’ social networks, technical limitations, and common barriers to consistent phone use. The pilot also allowed them to figure out what kind of staff infrastructure was needed to train farmers, make contact with nonrespondents, and develop their data collection approach.

The research team designed and tested a set of short, simple questions that would allow them to capture how farmers were perceiving climate dynamics and how that related to their decisions on what to plant and when. That seed pilot data then fed into a proposal that received funding to support a much larger set of activities including both Kenya as well as Zambia.

The researchers used TextIt’s Flow Engine to design easy to understand, conversational SMS surveys ranging from 5-10 questions divided among the 3 periods within the agricultural season: planting, growing and harvest.

After multiple trainings and comprehensive field research, they chose to use English as their application’s default language. They found that most prospective users were skilled enough to answer simple, guided questions.

They decided to focus on one crop, maize, to simplify farmers’ expected contribution and stabilise on a central crop to assess the agricultural season.

The researchers chose to supplement the SMS surveys with traditional in-person interviews that provided more extensive information about a subset of farmers than the SMS system would allow. If a participating farmer didn’t respond to the SMS surveys, researchers  would call and/or visit them to assess the barriers to that farmer’s participation.

A key to their success was the time and effort spent understanding and then onboarding their end-users. At TextIt, we’ve found this essential to success.

The researchers  targeted a wide spectrum of farmers.To assist older and lesser-educated farmers, they focused time and resources on training younger members of the household and community to provide technical support.

The training sessions were broken down into groups of 10 farmers led by 2 instructors who demonstrated the SMS application and led the farmers through each Flow, providing support and guidance along the way. They found that questions such as "Did it rain on your field this week? Yes or No?" were easier for farmers to answer than "What do you think your harvest will be at the end of the season?" For the latter question, they focused on explaining the importance of consistent reporting and the relationship between the data being reported each week and expected yield. The concept of tracking and reporting yield is entirely new to most of these farmers.

The research team wasn’t able to secure a reverse-billed telephone number, so they had to get creative to ensure the participating farmers had the resources to complete the surveys. To do so, the researchers compensated farmers the cost of SMS messages plus a bonus in the form of an airtime transfer.

60% of the participating agriculturalists completed the study, providing sufficient quality and quantity of data to secure funding from the United States National Science Foundation and justify the expansion of the program both within Zambia and to Kenya, where it continues today. The research team is working with the Mpala Research Centre in Kenya and the Zambia Agriculture Research Institute (ZARI) in Zambia as critical in-country partners in the development and implementation of this research.

In the future, the researchers will be deploying  physical instruments to measure a variety of environmental factors that will greatly improve the quality of data submitted in their mission to find the ideal formula for improving yields.