UNICEF is acutely aware that in India 50% of girls don’t know anything about periods until they start having their own, in Nepal girls report frequently missing social occasions due to their period and other miss school or work trying to manage it. To raise awareness of girls facing taboo issues which has a profound effect on their lives, and to get the subject out in the open the UNICEF WASH Team used UNICEF’s U-Report tool in a globally coordinated attempt to understand the challenges facing girls.   There’s a need to talk about Menstrual Hygiene Management (MHM), firstly because it should be easily spoken about and it only gets easier if we set the example, and second so UNICEF can better understand the issues girls face to be part of the solution to a societal problem that should not even exist.

Understanding the situation is hard because global data on menstrual hygiene does not exist, and national data is limited. Until late 2016, widely used nationally-representative household surveys have not included questions on MHM, nor has there been standard guidance for monitoring MHM in non-household settings like schools and workplaces. More data is expected in the future because of the recent addition of MHM-related questions to MICS6 surveys and expanded questions in the JMP Core Questions and Indicators on WASH in Schools. However, because household surveys are not administered to girls under 14 years old, they still omit the experiences of early adolescents. 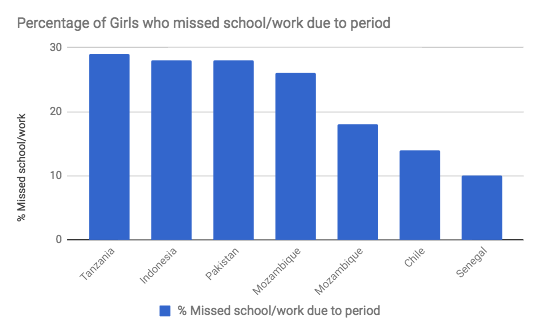 Action: Addressing the Data Gap and speaking the unspeakable

Including girls as young as 10 years old almost 45,000 female U-Reporters answered a coordinated poll across 19 countries and U-Report Global about their experience with MHM. The poll showed that in both high-income countries as well as lower -income countries, girls and women face real challenges to attending school or work when menstruating:

On average, 13% of girls from low- and middle-income countries missed school or work due to their period. This number was markedly higher in Pakistan and Indonesia at 28%. In high-income countries, this figure was 8%.

The number of girls experiencing periods for the first time without any knowledge of them was startling.  There was a clear need for more information so as a follow up to the poll UNICEF staff prepared a ‘frequently ask questions’ document based on the issues highlighted in the poll consisting of 62 questions and prepared responses.  Country offices with extreme problems (Pakistan, Indonesia and Cote d’Ivoire) were invited to participate in UNICEF’s first global chat.  Working with the Girl Guides and UNICEF experts female U-Reporters were invited to ask any MHM question they had for a limited window based on availability of staff resources and volunteers.  Questions were anonymously received and answered using the FAQs.  In a 2 hour period Pakistan, Cote d'Ivoire, Indonesia and the U-Report Global platform were able to answer 4000 questions.  In future UNICEF Innovation is aiming to develop tools to automate the process so this information can be received at any time.  88% of questions received were about MHM showing U-Reporters did not abuse the opportunity to access an expert, remaining questions were about the platform itself and how the first live chat worked.  Taking a random sample of 174 questions an analysis shows that general questions about periods, managing the pain of periods and questions about when to expect periods were all common.  Other questions were related to myths people have heard about periods which UNICEF promptly debunked and sex, as shown in the graph above. 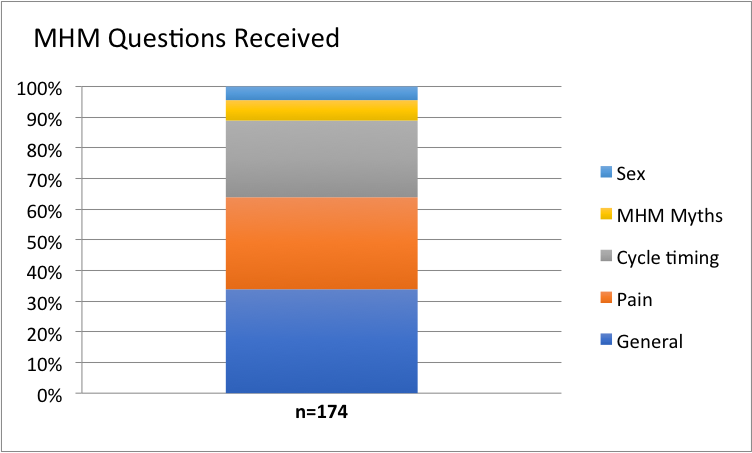 Further initiatives have since taken place building on the information provided by U-Reporters.  Indonesia streamed a Facebook Live video of an expert answering questions received in U-Report to ensure not only those who asked the questions got responses but other people not directly involved in the chat could find out information as well.  17,000 people watched the 39 minute video which received over 23,000 reactions, reaching 24 times more people than even asked a question.

UNICEF Pakistan has since launched an MHM innovation challenge to encourage U-Reporters to come up with their own solutions to break the taboo.  U-Reporters responded.  60 submitted valid proposals of which 7 were selected as grant winners of up to PKR 250,000 to develop their ideas.  Winning ideas include a sanitary napkin vending machine, an artificial intelligence tool and an app that will be developed by young U-Reporters in partnership with Islamabad Engineering School.

UNICEF HQ WASH team supported the effort with advocacy by writing an opinion piece in the Huffington Post using the data.  Considering the data only took 24 hours to collect, and the Live Chats only 2 hours to execute the outcomes have been very impactful and reached well beyond the U-Report project itself.  FAQs used in the live chat have been well documented and are ready for use whenever a U-Report country needs to answer the demands of young girls trying to understand the natural menstrual processes happening to their bodies.