Using radio and RapidPro to engage with Somali women and youth

Below is an extract from a report prepared by Africa’s Voices Foundation for UNICEF Somalia in March 2016. The full report can be downloaded here.

During 2015 and early 2016, UNICEF Somalia partnered with Africa’s Voices Foundation, on an innovative citizen engagement and social data pilot. Eight interactive radio shows, implemented by project partner Free Press Unlimited, engaged Somalis across South Central and Puntland, with over 8,400 raising their voice and sending free SMS messages to UNICEF’s RapidPro platform. These messages, along with follow-up messages answering a range of questions, were analysed by Africa’s Voices’ expert researchers, and visualized for UNICEF using interactive online dashboards, reports and presentations.

RapidPro was used to allow for interaction with radio audiences over SMS. Flows were designed in the system to automatically send SMS surveys to people who had text into the radio programmes. The surveys asked for socio-demographic information (location, age and gender), if they are a parent, and questions about health practices.

To adhere to data privacy guidelines, access to the platform and incoming data was restricted to UNICEF and Africa’s Voices Head of Research, and SMS data was securely stored. All SMS communication, both to receive and send, was free to participants.

The radio shows proved very popular and participation was high. Over 8,400 people raised their voice and answered the question broadcast on radio, via SMS, and then answered follow-up questions sent by SMS.

The radio show attracted new participants every week, reaching its peak of participation in the last three shows. In the last show, on the 1st of January 2016, 1932 people sent their opinion to the show’s question (“Do you think babies should be taken to health facilities when they present danger signs?”).

The typical participant in the radio shows is young (20-29 years old), either male or female, a parent, and living in an urban area.

Combining the radio audience opinions with socio-demographics and practices, a number of beliefs that underlie different health behaviours and how they vary according to gender, age group and location.

Below is a screenshot displaying data captured by RapidPro and displayed on an external dashboard. 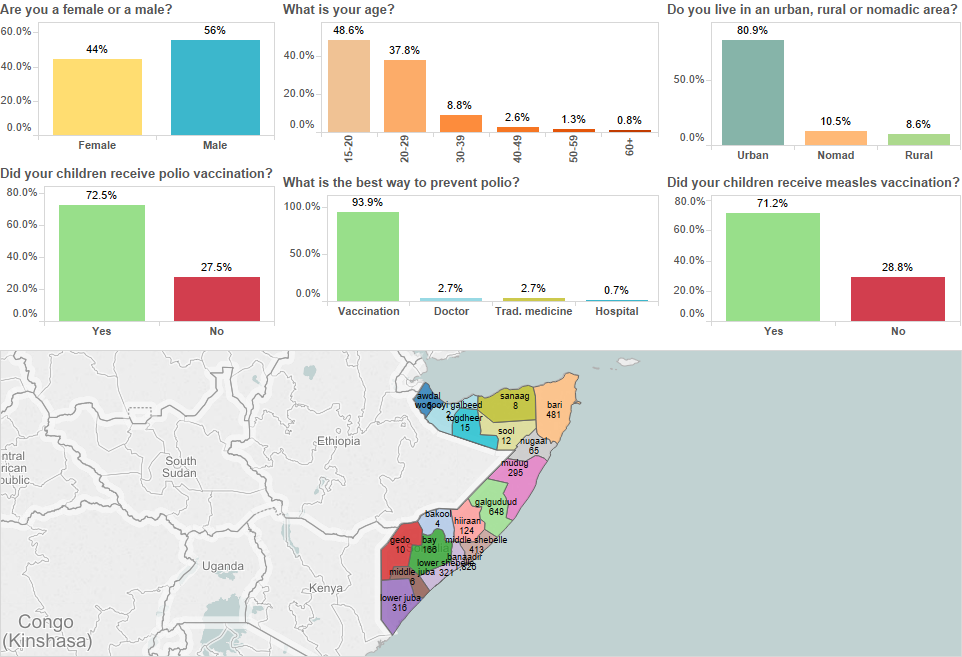 One of the main lessons learnt from this initiative is that this type of citizen engagement tools are easy to scale, and there are exponential benefits to UNICEF and partners if this approach is expanded to other programming areas (e.g. education, nutrition, sanitation) and other locations.

Some benefits of this approach include:

• A richer database (anonymised and consensual), as participant numbers grow as well as the range of data per participant. Currently, the RapidPro database has 7,633 people with their (masked) phone numbers, sociodemographic information, whether they are a parent and several health markers. The database is already full of potential for future campaigns - SMS and otherwise - tailored for and targeted to particular sections of the population. It is also a launchpad for follow-up research. Growing the database will multiply this potential.

• Engagement improves over time. Engagement consistently grew over the eight weeks, with the most popular radio episode, in terms of text messages received, being the last. This is an encouraging lesson that engagement builds over time and that future radio series should run for much longer than eights weeks. This allows UNICEF to build its reputation as an organisation that actively listens to citizens, and have the rich numbers to prove it.

• Improved efficiency and cost. Scaling up this approach rapidly improves the efficiency of the process, the amount of people reached, and therefore the cost-effectiveness of the approach.